Note the familiar lady pulling her hair out.

No really, it wasn’t that bad.

I went to the Smashwords site and downloaded Mark Coker’s Smashword Style Guide and read it through once completely and several chapters twice and three times. I won’t repeat everything in the guide. It is very complete and informative, yet still I had a couple of unanswered questions. I did further research and thought I’d share what I learned and what worked and what didn’t.

They strongly suggest you use something called The Nuclear Method. This method insists that you will save yourself a whole lot of trouble if you copy your entire manuscript into a text editor. At which point, you do the opposite, copy your text document back into Word. Removes all formatting! Yippee, we can start with a completely virgin document.

I so did not want to do this.

I use italics to denote emphasis, (which maybe I should not be doing quite so much of but that is a subject for another day) and all my italics were going to be wiped out if I did it. Gone Italics.

I needed to figure out a way around this and discovered something interesting. In Word’s Find functionality, not only can you search on a text string, but you can search on formatting! I didn’t know that before. Here’s how it’s done:

Then click Format, then font, and you’ll see the familiar font screen come up where you can select the format you are looking for. Note the search for “Font: Italic” in the red circle. Now I could use the Find Next functionality for each occurrence of italics in my document! Unfortunately I could not replace the italicized text with anything, but this was better than the alternative. For each instance found, I put the text string “qqq” behind it.

There were 145 instances of italics in my manuscript and I knew where they were when the original document was back in Word because I searched on “qqq”.

I copied the document to Wordpad (my choice but you can use any text editor), opened a brand new Word document and pasted that sucker in. I turned off all Autocorrect and Autoformat options. This is spelled out in the Style Guide.

Next I created eight styles. I only used seven of them and Normal.  Here is a very good article about how to create styles in Word. No need to repeat that here.

I didn’t end up using SWTitle. I had wanted 16pt bolded text, but for some reason the bold didn’t take. It did, however, work for SWTitle, defined as 14pt bolded so I used that instead. This is an example of stuff that can happen, for which you can find no explanation.

I could have fooled around trying to get Smashwords to recognize it the way I intended but decided it wasn’t worth the trouble. Ebook formatting is evolving and maybe the Smashwords “Meatgrinder” just needs to be tweaked a little more. It will get better and better with time. It didn’t seem something for which I should tear out any more hair. I have precious little left at this point.

Modify the Normal style however you want it and use it for all your internal chapter text. Don’t use it for the front matter, the table of contents, and chapter headings. Use specific styles for all that.

This is my Normal. I used Times New Roman for everything. It is good practice not to use too many fonts, one is ideal, maybe two at most. 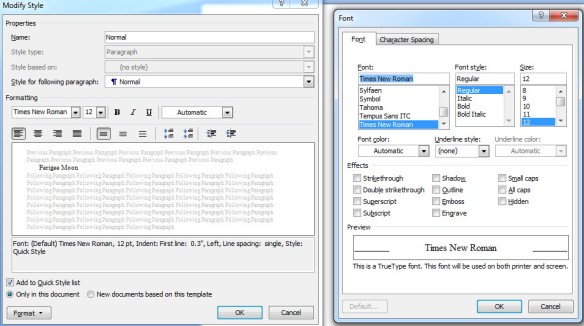 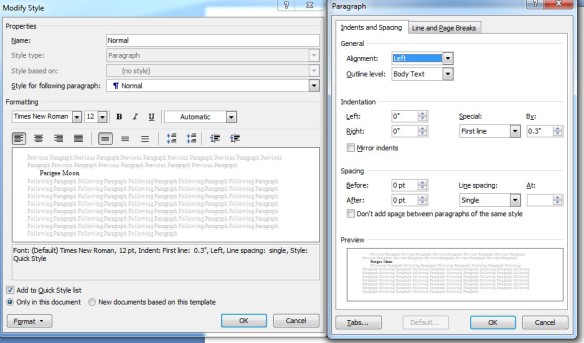 I defined other styles as I needed them, all based on Normal except SWChapter which was based on Heading 1.

I couldn’t figure out from the Style Guide how page breaks worked. I don’t care how the front matter looks, even if it all flows together, just so there is some space between the sections, I am good with that. It is an ebook and everyone formats their reader a different way. It isn’t important to me that any of that starts on a separate page.

But I wanted the chapters to all start on a separate page. I don’t like it when I see new chapters directly following the previous one on the same page. I researched and found that the page break before is the way to go. The style SWChapter has a page break incorporated into it, which you set up when you define that style. And it works! I recommend it.

Everything in my manuscript is a style. I never once used the little Word buttons in the menu to change the font, or bold, or italics or alignment. Maybe you can do this and it will work but I didn’t.

My next novel will be written with this in mind. That’s if there is a next novel.

I went through my manuscript, applied the appropriate styles, and added “*****” between sections. I did this (reluctantly) because I could not discern enough space between the sections and I wanted to make sure they were noted by the reader.

Last step. I searched for “qqq”, applied the italics, and of course removed the “qqq”. Tedious.

One hair-tearing experience I will note. I spent way too much time on it but it seemed worth looking into, and then I got stubborn about it.

I figured if one was okay, it could be done. I turned on View Formatting Marks and juggled it around, experimented with the SWNoIndent and SWItalics styles at the ends of the formatted line and the line return, until I managed to eliminate one of the no-spacers. So now two are right, and one is wrong, yet they are formatted exactly the same way. One error remains. I give up. Smashwords has beat me. Much as I hate to say it, sometimes there just ain’t no explainin’ it.

I would recommend simplicity and I would think twice before doing the multi-format-on-a-single-line-thing again. Less is better when it comes to ebooks. No need to get fancy.

My book went through the Meatgrinder, though, with no errors, first time.

Here are two great articles I read while preparing this post.

Smashwords Formatting for the Lazy

Update: Forgot to mention, if anyone would like a sample of my file to use for reference, just contact me and include your email address and I’ll sent it out!

19 thoughts on “My Smashwords Adventure!”