Next up Prancer. Moral of this story is: Be careful who you bully.

Sponsored by Blogdramedy, each story will be about one of Santa’s reindeer and must be exactly 243 words long. Many other bloggers are taking part. The list follows the story, if you would like to check out other stories and compare. 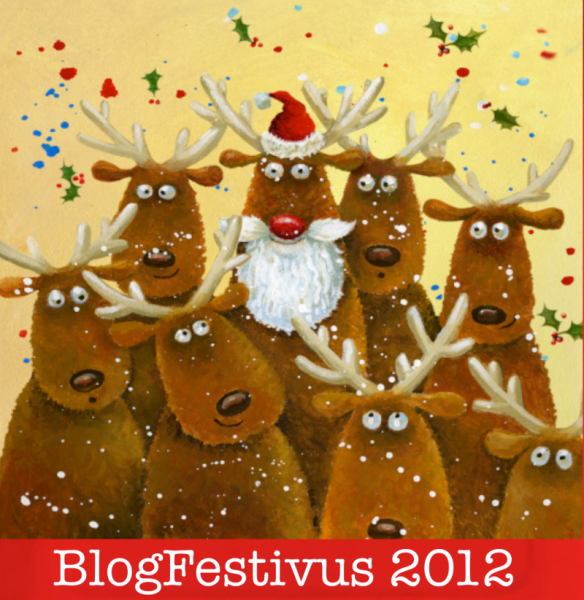 Prancer, born to Lancer and Pristine Reindeer, was given a combination of both their names. On the night of Prancer’s birth, Lancer had a need to search for a snout full to celebrate it with the other bucks down at the Deer Hall, and left Pristine alone to attend the new hour-old foal.

Alas, Lancer never returned and it was not known what ill had befallen him, though some say he could be seen staggering, dead drunk, near a dangerous precipice.

Thus it was that Prancer was raised by his mother in a single-parent stall. And in his adolescence the other reindeer laughed behind his back and called him “Prissy Prancer” and made odd body movements, depicting a young buck of ambiguous sexuality.

Prancer, mightily pissed off and weary of the tauntings, began to work his muscles at the YRCA, where he developed a brawn quite unrivaled in its girth and strength  and was endowed with uber-testosterone.

The last unfortunate young buck to sashay and whisper “Prissy Prancer” found himself on the ground, neck under Prancer’s right front hoof.

Thunder, said Prancer. That’s what you shall call me.

So Thunder he became, until Santa enlisted his indubitable strength for Team Clause, and who refused to know him as Thunder. Prancer is your given name, so shall you be known, said Santa.

And Prancer he was again called, but knowing of his bestial strengths, the other reindeer deigned not to screw about with him.

Rewind Revise – newly married and on her very own joy train.

Lenore Diane – thoughts from the Elf Queen herself.

Shouts from the Abyss – Tom’s on a mission to blighten your holiday season.

Fit it or Deal – Amy Severson bringing it robot-style.

So I Went Undercover – she’s undercover and that’s all I’ll say about that.

MC’s Whispers – Maria-Christina works in PR. What kind of “spin” will she put on this writing challenge?

Blog It or Lose It! – One word. Minecraft.

Voice in Me – Reena’s from India…where reindeer go on vacation.

A Year of Daily Posts – Sarah, the paperback writer (three manuscripts but they count.)

Diary of a Sensitive Soul – Immie, blogging from the U.K. (Why am I feeling Bruce Springsteen?)

The Day After — A musing wannabe.