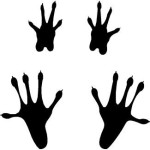 My adrenaline is still pumping. I’m afraid to put my ear buds back in to continue with my French lesson since I want to be able to hear what is going on in the house.

So, here I come, up the basement stairs after tossing in a load of wash (all nicely sorted, and shouted-out, and all the dispensers filled with their appropriate liquids), and I’m practicing the phrase “I don’t understand French” (Je ne comprends pas Français!) over and over because it’s the only thing I’m sure of with the French lessons, that I don’t understand French, and I continue up to my second story loft/office and who is sitting atop the file cabinet but Monsieur Squirrel!

I dub him Monsieur Squirrel, affectionately, hoping that he is but a scared, out-of-touch, senile old rodent who has wandered in, through an opening we have yet to discover, and once in can’t figure out how to get back out. This isn’t the first time M. Squirrel has gifted us with an appearance. He once showed up in the basement which is a lot harder to get him out of actually, so I guess I can be grateful I found him upstairs.

God. I’m a grown woman and I’m this afraid of something that probably weighs less than one pound? He doesn’t like me either, and runs into a bedroom. I flail around in the hallway, running this way and that, to and fro, trying to decide what to do. If I go downstairs, I’m not sure I’ll have the courage to come back up.

But wait. He’s more afraid of me than I am of him. And then I think holy shit, then he must be fairly well paralyzed with fear. I know he wants to get out of here as much as I want him out, so let’s work together on this. Coaxing isn’t going to work because I’m pretty sure he won’t respond to sweet talk, and I don’t understand Squirrel so a bit of tough love is necessary. Shouting and stomping and scaring the literal crap out of M. Squirrel, so that he and I can reach an agreement and I can be where I want to be (without him) and he can be where he wants to be (with his squirrel buddies, maybe there’s even a Madame Squirrel).

I am afraid if I go downstairs I’ll never have the guts to come back up, knowing he is up here.

But I go downstairs. I open the back door and the front door wide, so he can get out, and venture back upstairs, heart pounding and I’m screaming at the top of my lungs so he’ll be sure to hear me. When I come back up, I decide to open a window in the master bedroom and remove the screen so he has another escape route.

Gah! As I enter the room I see him dart under the bed! He has now relocated to my bedroom! I vacate the premises and return to the loft and shout. Get out! I see him (thankfully) run out of the bedroom down the stairs to the first floor, but he (duh, M. Squirrel!) completely misses the fact that he’s run right by the open front door.

I chase him around the living room and it works, or at least gets him into the kitchen where there is another opened door. But he (again) ignores his escape to freedom and decides instead to run along the counter and hop onto the computer desk and then bash into a closed window before he leaps up onto the bar. He plops down from there  to the floor and casually strolls outside. I watch him go and have never been so glad to get rid of a houseguest in my life.

But now I’m still kind of spacey and uncertain about it and I’m thinking, what if he comes back? What if he decides he likes it in here? What if he really is old and senile and looks at this as a nice rest home? A place to spend his golden squirrel years?

I can no longer concentrate on Lesson 4 of The Pimsleur Approach, Quick and Simple French – there’s nothing quick and simple about French, I’m here to tell you – because now I’m sure there must be a whole Squirrel family in residence. It could be a regular Squirrel Sta-cation for all I know.

Thinking that I might return to some level of normalcy later, I postpone French Lesson 4, but vow to take it up this afternoon, when my heart rate has returned to normal. The French lessons are because I’m leaving for Europe in a few days for a month (London / Paris / Rome), so I’m reading Rick Steves books and attempting to learn some French, since I suspect French people will be nicer to you if you at least attempt to speak their language.  I’ve heard that the French don’t like us Américain(e) much, but then I’ve also heard that isn’t true. Not knowing what to expect, I thought I’d at least try learning enough French to convince them that, though I may be a vile and vulgar Américain, I at least cared enough to learn sufficient French to convince les Français of my stupidity and complete ineptitude with their language.

I will be posting reviews of books for the next five weeks, as I’m not sure what kind of blogging I’m going to be able to do whilst over there, across the pond. These are all good books that readers of this blog might enjoy, and were originally posted at another blog site, Boomers and Books.

While we are gone, I hope Monsieur Squirrel doesn’t decide to take up permanent residence here.