Warning: Non-humorous post. The fact that I warn that this post may not be funny assumes that there are earlier posts which have been funny, which, of course, is only in the eye of the humor-beholder.

There is one issue, well actually there are several, but this is one I’ve been thinking about for years. Outsourcing to other countries, or offshoring. Specifically, the offshoring, or elimination of American IT jobs. I do not profess to be an economic expert, nor do I have a degree in finance, but can anyone out there enlighten me as to how the practice of sending as many of our IT jobs as we can to other countries is good for our economy and ultimately for our country?

I’m just talking about IT here because it’s what affects me. Other professions currently offshored include (but are not limited to) writers, administrative assistants, tax preparers, web programmers and designers, drafters, human resources, call centers, and the biggest sinkhole of jobs, manufacturing. In 2011, 2,273,392 jobs were outsourced. 53% of the manufacturing jobs, 43% of IT jobs, 38% of R&D, and the list goes on. On and on.

My name is Peggy.

IT, in the olden days, was a niche career path where one could establish a place for him/herself in the solid, safe middle class. It took a certain amount of interest and aptitude in computers and logic, so it appealed to some but to others it seemed boring and nerdy. I always considered it a good thing that not everyone wanted to do this particular work since it was what I did, and if everyone wanted my job then there would be less opportunity for me. Selfish? Maybe. But I’m guessing most everyone feels that way about his or her chosen profession.

So we IT-ers enjoyed two-plus decades of secure cube-dwelling positions, established ourselves as professionals, bonded with those sharing our interests, bought homes, consumed things, put food on the table, planned for retirement, took vacations and saved for our kids’ educations. It wasn’t a grand lifestyle but it worked out pretty well for a lot of us.

Then came The New Millenium and the passion for money, and more money, and money no matter what, and screw your way to the top of the money making market. Do it cheap, in order to put more on the bottom line. Outsource, offshore, “right-size”. There are people who will do it for a third of the money. Get rid of the high-paid American workers. The larger the corporation, the more the push to outsource. Get your IT services cheap! Any corporation who is still paying the big bucks for foot-draggin’ Americans has some ‘splainin’ to do to its stockholders.

Aren’t we kind of paying the price for that now? Everyone complains about the current administration, how the “economy hasn’t improved” how unemployment hasn’t gone down. An aside here, isn’t the percentage of unemployment a manufactured number anyway? How do we count those who have used up their unemployment benefits and are still jobless, and unemployment-less as well? I never did get that.

If we have millions less jobs available here, how can the job market ever improve, how can the housing market improve, how can the tax base be supported? There are cities and municipalities going bankrupt now. As a matter of fact, it was the story of Scranton, Pennsylvania which prompted me to finally write this blog. Fire-fighters and policemen have had their wages slashed to minimum wage. Minimum wage? You can probably make more than that pulling Double Expresso Lattes at Starbucks. And the benefits might be better. So forget risking your life to do a job. What’s the point?

This is not a political blog. But what can the current administration do about this? Force corporations not to outsource? Or, convince them with straight talk and earnest pleas not to do it anymore, or at least reduce the number of jobs outsourced? I don’t know if that’s possible.

What I do know is that one of the candidates who will be on the ballot in November believes in outsourcing. He’s been accused of having done it. That’s not to say he won’t try really hard to change the way things are now, because for sure this individual has changed his mind a number of times about a number of issues. I’m just sayin’.

Interestingly, when I wanted to see if anyone out there was blogging about offshoring, I googled “blogs about offshoring”. Know what came up? Every item in the list concerned how to get offshore help to write blogs.

So I repeat my question. If there is someone out there who could tell me, or point me to an article or a book that would explain it all to me, how outsourcing helps (or at least doesn’t harm) our economy and our country, would you please comment? I surely would appreciate it.

I’ll leave you with an image. You know when you made that call to get help with your wireless internet router? This is where that call went. 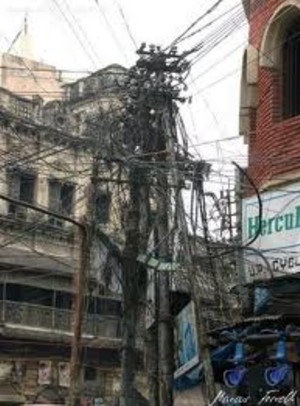