This has been done before. I know it, but I can’t resist it. The irritation I feel when I see any drug commercial is enough to cause me to ask my doctor for one, preferably an anxiety-reliever.

This post has nothing to do with writing, except the writing of some very bad, atrociously bad, commercials. And marketing. Of course, always marketing. It’s all about the big drug companies, and how they can appropriate a bigger share of the health industry profit pie.

Ask your doctor if [insert name of C-drug here] is right for you.

Does anyone else (other than me) want to lift the nearest piece of furniture, which weighs such that an average woman can lift it, and hurl it at the TV when you hear these words? I don’t know about you, but when I go to my doctor, he has to look at a computer screen to remember who I am. It’s not like he’s a personal friend or anything, although I think I did see him in a movie theater at one time and he said hello. I was struck dumb, and he said it’s Dr. Smith, you probably don’t recognize me without the white coat. I had been in his office just the day before (two at the most) so that’s probably the reason he remembered me.

He had recently moved from a private practice to one of those places with names which make people think they actually care about making people better, such as OhioHealth, places where he is paid by some huge conglomeration of doctors and clinics and urgent care units and maybe even hospitals, where he only has to be a doctor and doesn’t have to worry about running out of tongue depressors. I accused him of “working for the man” and he was just a bit defensive and said that now he could pay attention to doctoring without worrying about the administrative part, at which he feared he actually kind of sucked at. I was surprised at this admission.

He is a very good guy, and I have nothing bad to say about him, but if I asked him if X drug was right for me, he’d probably think I was cah-razy. 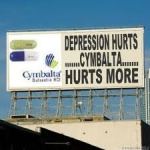 Cymbalta. This is a drug for depression and/or pain. This seems odd to me, right out of the blocks, that one drug could be good for both of these things. But yes, it is used to treat major depressive disorder (MDD), anxiety disorder, neuropathic pain and fibromyalgia, osteoarthritis pain and chronic low back pain. So, if I’m depressed, shouldn’t I take a drug that’s JUST for depression and not combined with these other wimpy ailments? I mean really, depression seems more serious to me than something I could pop an Advil for. But if I decide to take Cymbalta, and my doctor says to me, “I believe that Cymbalta is right for you, oh Patient No. 412847534548” (<– this is a made up number, I don’t think my doctor has this many patients) then I might consider taking it. Because after all, I’ve seen the commercials, where the unhappy older people look sad and rub their knees and look out the window at a dreary day and they look, well, pretty pathetic. The commercial is divided into four parts:

Bad part. This is you, sad, depressed, in pain, not functional. Anxious and pretty much a loser. The voice-over guy is talking about how miserable you are, and the camera shots are making you look, well, not good.

Good part. The part where you play with a dog and laugh when he licks your mouth, and you walking on a beach, reading a book, with a small, slightly sad yet satisfied, fulfilled smile. The voice-over guy now talks about how wonderful life will be after Cymbalta.

Bad part. Uh oh. This is what can happen if you take Cymbalta. Make the pretty music a little louder, the voice-over guy speeds up the dialogue a bit so you have to strain to understand it. This is where they tell you that you can expect nausea, dry mouth, sleepiness, fatigue, constipation, dizziness, decreased appetite, and increased sweating. This sounds like it might not be worth the trouble to me, so let’s skim over this part. Get it over with quick.

Last part. The clincher, yeah there’s bad stuff that can happen but all in all Cymbalta is a pretty good deal, so “Ask your doctor if Cymbalta is right for you.”

They write songs just for drugs. Here is the Cymbalta song, as performed by the original composer.

Chantix. In order to be in a Chantix commercial, you must be a middle-aged, middle-class (or less) heavily accented woman from New Jersey. You must be able to pronounce Chantix (CHAY-un-tix). You must have smoked for forty years, or ten years less than your age. You can then tell your part of the smoking story in 49 seconds of a two-minute commercial, how you are a pack a day smoker, how you’ve instructed your kids never to pick up a cigarette, etc. How your doctor prescribed CHAY-un-tix. Then for the next one minute of the two-minute commercial, all the bad stuff that will happen to you if you take CHAY-un-tix will be all spelled out for you. Yeah, the music gets a little louder here too. Here’s what can go wrong:

Get emergency medical help if you have any of these signs of an allergic reaction to Chantix: hives; difficulty breathing; swelling of your face, lips, tongue, or throat. Stop using Chantix and call your doctor at once if you have any mood or behavior changes, confusion, anxiety, panic attacks, hallucinations, extreme fear, or if you feel impulsive, agitated, aggressive, restless, hostile, depressed, hyperactive (mentally or physically), or have thoughts about suicide or hurting yourself. Chest pain or pressure, tight feeling in your neck or jaw, pain spreading to your arm or shoulder, vomiting, sweating, general ill feeling; feeling light-headed or short of breath; sudden numbness or weakness, especially on one side of the body; sudden severe headache, confusion, problems with vision, speech, or balance; easy bruising, unusual bleeding, blood in your urine or stools, coughing up blood or vomit that looks like coffee grounds; fever, sore throat, and headache with a severe blistering, peeling, and red skin rash; or the first sign of any blistering type of skin rash, no matter how mild. Here are a few less serious side effects of Chantix: nausea (may persist for several months); stomach pain, indigestion, constipation, gas; weakness, tired feeling; dry mouth, unpleasant taste in your mouth; headache; or sleep problems (insomnia) or unusual dreams.

Holy crap. I think I’d take my chances with smoking.

But hey, it can’t be that bad. Right? I mean, there’s Robin, slicing an apple with a scary looking knife. Obviously, SHE’S not suicidal.

What’s interesting about this ad is, that it lasts for two minutes and nearly half of it consists of admissions of all the horrible side effects.

Is this drug right for you? I think not.

Here is Robin in case you don’t believe me. Click on “Watch Robin’s Ad”.

Cialis. This is a very handy drug. When you take it, the walls of your house can fall away and you are sitting on the grassy banks of a stream and it is a beautiful, very green place. This can probably be done because of the way they build houses today, everything being kind of temporary. It is troubling to think what could happen in severe weather, can the walls fall away when you don’t want them to?

With Cialis, you take it, there are several seductive glances between the couple, the walls fall away, and then they are magically transported into two bathtubs.

Here are the side effects: The most common side effects with CIALIS are: headache, indigestion, back pain, muscle aches, flushing, and stuffy or runny nose. These side effects usually go away after a few hours. Uncommon but serious side effects include: An erection that won’t go away: If you get an erection lasting more than 4 hours, seek immediate medical help to avoid long-term injury. (Yeah, yeah. We’ve heard about this, but does it really happen? And if it does, is this considered a side effect?)

In rare instances, men taking prescription ED tablets, including CIALIS, reported a sudden decrease or loss of vision or hearing (sometimes with ringing in the ears and dizziness).  Remember, back when you were told that performing certain acts would make you go blind, guys? It’s for real.

The good news is that the unhappy, depressed, in-pain people can pop a Cymbalta, then pop a Cialis and wait for the walls to fall away. Maybe afterwards they can share a cigarette.