Occasionally I like to write about things about which I know not much (or nothing) and when this happens a field trip becomes necessary. In my new novel, Perigee Moon, the main character, Luke, becomes very attached to a place, a park in Columbus, Ohio, called Highbanks. This park is located in the midst of urban sprawl just off US 23 between Worthington and Delaware, Ohio in the midst of suburban housing and some rather forgettable urban development, strip malls, car dealerships and the occasional abandoned home.

Luke is especially enamored of the wetlands area which can be viewed, but to which there is no access. There is a trail to an overlook deck which is built on stilts such that the park goers cannot access the land, but can only view the natural protected area.

I decided if I wanted to write about it I better not just assume it, but should go there and take a look for myself. A field trip. Unfortunately I waited until December to go but needed to get there because the book is nearly completed. I couldn’t afford to wait around for spring.

We had an unnaturally warm December this year, no white Christmas, and days that felt like late March. On December 21, 2011, the high temperature must have hit 60. It had rained earlier but the sun appeared at noon and I thought, this might be the last chance I have to do this. So I went to Highbanks in order to walk the trail to the wetlands overlook deck. I packed up my camera because I figured it might be blog material and I wanted to include some pictures.

The park has two main paths and the wetlands trail veers off from one of them and continues for .4 mile to the deck. I started down the path, got about twenty steps and thought, hmm, this might not be as easy as I had hoped. Because it had been so wet, the trail was covered with wet, soggy leaves with standing water in places.

Since I am a bit of a little old lady when it comes to slippery stuff, I was not a little apprehensive. But I really, really wanted to see it so I trudged on, thinking all the way, this is dumb, what if I fall down here and break something (and around my house we joke about falling down and breaking a hip, but really, that seems as if it could be more of a reality these days), and there I’d be on a trail where sane people are nowhere in sight. I figured I could always call someone as I lay bleeding on the ground but it would be a case of hindsight at that point and a realization that I had just done a really dumb thing.

With every step I thought, I have to do this all again on the way back, but for some reason I kept on with it. At points I had to stop and figure out my strategy for the next step. How do I get over this little stream of water which is surrounded on both sides by roots of trees that are slimy with moss and other miscellaneous park debris? Each step was a new hazard.

Finally I reached my destination. It was worth the trip. Here is what I saw there:

The wind kicked up and I thought I really need to get back and not get stuck in a rainstorm which would only add to my precarious situation, so I picked my way back the .4 miles of slime to the main trail. Once safely back to the main (much more civilized) trail, I notched up the pace because the changeable weather was now kicking in to windy, going-to-rain-any-minute mode. I was a little disappointed in how this picture turned out, that it didn’t capture the drama of the day. While overhead the sky was still blue, I could see ominous black clouds at the horizon through the trees. 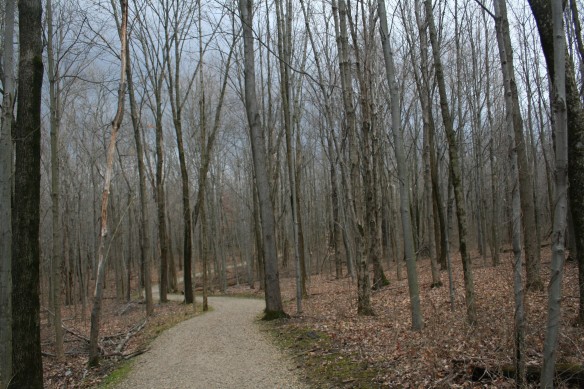 Sure enough, it rained and the wind became very gusty and those trees, so tall because they have been there since the beginning of time and denuded of their leaves, swayed and cracked. I could hear the occasional limb let go in the distance and a new worry surfaced. What if I get clocked with a piece of a tree?

I made it back okay without breaking anything and nothing breaking me, but not in time to avoid the downpour. After I was pretty thoroughly soaked it didn’t seem to matter much any longer. You can only get so wet but a bad hair day for sure.

It might not make a bit of difference, but I feel by being there and seeing what Luke saw I can write about it with a little more confidence.

Here are a couple more nice remembrances of my outing.

Up through the trees: 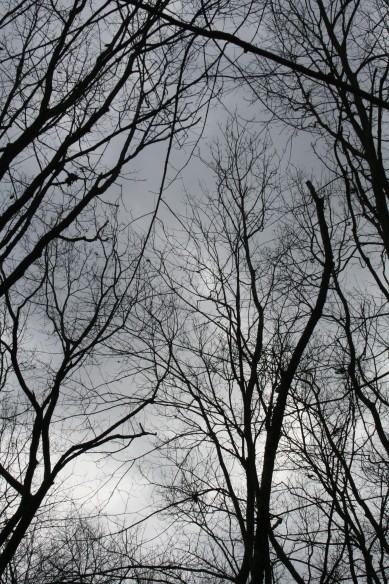 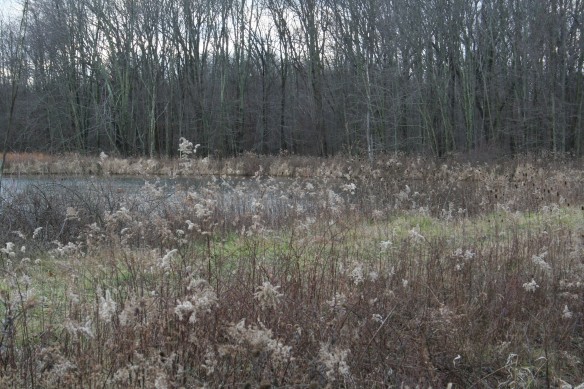