Recently, I read a couple of blogs about creating book covers. I probably should have read the articles before I designed my own book covers, instead of after, but mostly I read them hoping they would reinforce what I already knew.

I knew early on that I didn’t want to use the book cover designs available in CreateSpace (or BookSurge before it was CreateSpace), and someone suggested BookCoverPro. I investigated and decided to go for it, it was a fairly simple graphics package, and all the basics were there, adding text, borders, boxes, pictures. Once you put in the size of your cover, and the number of pages in your book, it figures out what size the cover (back, spine and front) must be and presents you with a blank template.

My first attempt was pretty basic, I plopped a picture of the Gulf of Mexico and clouds, with sun shining through on and sized it to cover the entire area.

After that I added text, and was done. This was a very simple cover, indeed, probably a bit too basic. I was going for a feeling, of loneliness, or melancholy. I’m not sure I succeeded with that. Once inside the book, the reader might think it was a picture the main character, Jay, had taken, because he is an amateur photographer. 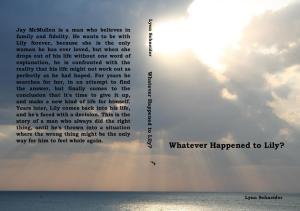 My second attempt was a little more involved.

The wilted flower is referred to twice in the book, and it’s meant to be symbolic. That perhaps Lydia, to whom it was given, should have looked at it, drooped and dead before it could blossom, as an omen that her relationship with Geo be allowed to go the way of the rosebud. It comes back into the story years later and she tells him, “This is what happened to the first one.”

I bought a miniature rose bush in a pot, at Kroger’s and snipped the bud, placed it in a glass of water and waited. A few days later, it was perfect. So I took pictures of it, pictures on a black background, pictures with a bright background, with and without flash. This is the one I chose:

I used my photo editing software to get rid of the background and fill with black. I use a package called Photo Studio 5.5, which came with my Canon camera, and it’s a subset of what PhotoShop offers, but is usually enough. You can buy PhotoShop but it’s a bit pricey and if you aren’t very serious about editing pictures, it might be overkill. A good alternative is to download a free copy of GIMP which is every bit as comprehensive as PhotoShop, and it’s free. There are tutorials available about how to do anything you want in GIMP. I wonder how they do it, the authors of GIMP, offer such a complex, professional-looking package for no cost. There will be a learning curve to it, and I haven’t mastered it yet either, but I plan to.

I made the cover of the book black and put the picture on, made the text white and I liked the combination, of dark pink, black and white with green. I got a little more creative with the back cover this time, put a picture of the author there, a dark pink box, and inside that another light gray box, which made the dark pink now a border, with black text.

The first blog I read, The Dos and Don’ts of Cover Design, stressed three points, and I felt I had them all covered.

Letters that pop. I had that, white letters and a black background, and black letters against a pale background. Check.

Contrast. The dark pink against the black, and white lettering, I think that’s contrast. Check.

It should say something about the book. Not sure I can give a check here, although maybe it counts that there is a story about the wilted flower inside.

All in all, I’d say I didn’t do too badly here. On to the next article. Ten Tips for Effective Book Covers.

The title should be big and easy to read. Check, the title is big enough.

Don’t forget to review a thumbnail image of the cover. Check, it looks okay as a thumbnail.

Do not use any of the following fonts (anywhere!): Comic Sans or Papyrus. Check, used standard font.

No font explosions! (And avoid special styling.) Check, no explosions.

Do not use your own artwork, or your children’s artwork, on the cover. Does photography count? Probably not, check.

Do not use cheap clip art on your cover. Check, no clip art.

Avoid gradients. Check, that’s where the color washes from dark to light.

Avoid garish color combinations. Check, I don’t think I did that.

Finally: Don’t design your own cover. No check! Uh oh.

And there was a Bonus tip: No sunrise photos, no sunset photos, no ocean photos, no fluffy clouds. Can’t check either, as there are three out of four here, on the cover of Whatever Happened to Lily?

I am not too sure how well I fared on the Ten Tips.

What do you think?

19 thoughts on “Design Your Own Book Cover”